After a really fun week in Florida (and 12 hours on the road), I was slated to do 16.4 at my home box on Saturday. I missed my box a lot while I was gone, and I was looking forward to the chaos of it. I had actually watched the 16.4 announcement live on Thursday night, and I had been following Dave Castro on Instagram, so I wanted to see what his cryptic clue meant:

Yeah, I don’t know what that meant either. Or, at least I didn’t, until I saw what the 16.4 Open workout would entail:

I made sure to warm up everything: my back, my hamstrings, my legs. I would need them to get through the deadlifts. I wanted to also make it through the wall balls, so I did some squat stretches too. I didn’t pick up the fully loaded bar until about a minute before my heat started, and I muttered, “Jesus!” Reene immediately told me not to think in that direction. She was right. I needed to just break it up into sets. 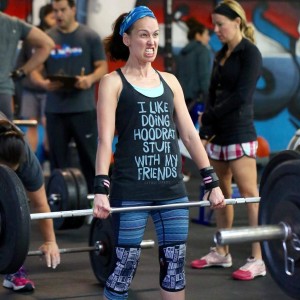 Jessica was my judge for this one, and at 3-2-1-GO, I focused purely on my deadlift form. I had 55 of them to do, and I was not going to smoke my back on them. That meant doing the deadlifts in sets of five. It was slow, but my back was already sore from sitting in a car all day the day before. I made sure to keep my shoulder blades squeezed and use my hamstrings to get the bar off the ground. And apparently I made some great deadlift faces. Deadlift faces are so sexy, don’t you think?

Then, on to the wall balls. I went up against the wall, instead of a target, and I no repped a bunch of times. That was okay. I deserved every no rep I got. I ended up tearing off my wrist wraps during the wall balls, and my headband fell off. I don’t remember how I broke up the wall balls; all I know is that when Jessica told me that I was done, I was thrilled – and then realized I had to row.

I gave that rower everything. Legs, arms; arms, legs. I kept that up for 27 calories, and then the 13 minutes was up, and the only thing keeping me from falling over onto the floor were the foot straps on the rower. Eventually I tumbled off, and Jessica told me I did a good job, and I fist-bumped a few people as I stumbled my way over to my water bottle. I stuck around and watched a heat, then took off, feeling sore. Later that day, I spent quality time with my heating pad.

16.4 was awful. Yet oddly enough I’m still looking forward to 16.5, probably because we’re having a big party the night of the announcement, followed by a throw-down.