The CrossFit Open 17.1 WOD had me apprehensive, to say the least. It was a couplet of dumbbell snatches and burpee box jumps, for time:

The above is the scaled version of the CrossFit Open 17.1 WOD, which is where I’m at. I have never done 35-lb. dumbbell snatches, and I don’t think I have more than one of those in me yet. I’m also 5’1″, and jumping on a 20″ box 75 times scared the daylights out of me. Scaled it is, and it is what it is. I worried that I’d run out of time. 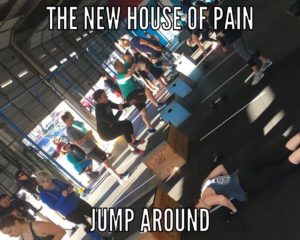 It was with that trepidation that I woke up with on Saturday morning. I got up early enough for breakfast (egg white/spinach/oats pancake and green tea), slammed pre-workout, grabbed my post-WOD protein shake, and headed for the box to sign up for the first heat.

I ran two miles to warm up, then did some shoulder mobility work until Coach Holly rounded us up to draw coaches’ names as team leaders (my team has AJ) and explain standards. We found judges; mine was Jodie, who had run one of my miles with me.

3…2…1…GO! That never, ever fails to get me motivated to do my best. I picked up that dumbbell like a boss. Knowing how long the WOD was, I planned to keep a steady pace. There would be no sprinting. There would be no jumping with two feet. It would be a slower, steadier effort so that I didn’t flame out. I did burpees the most efficient way I knew, jumping my feet forward as close to the box as I could. It saved me some steps.

Jodie was a great judge. She kept better count of my reps than I did and gave me just enough encouragement. I vaguely remember Holly giving me encouragement and Old Man Eric “encouraging” me. And I kept snatching and stepping and doing burpees until Jodie said I was finished.

The CrossFit Open 17.1 WOD was tough. I was in a puddle of sweat after. But it was also manageable and exhilarating to finish.

Did you do the Open WOD this weekend? How did you do?