So much happened at my first CrossFit competition that I am still processing it.

On Saturday, I competed in the Girls Just Wanna Have FUN-damentals competition at All Day CrossFit in Houston. It was a very scaled competition, and all female, geared toward beginners. ::Raises hand:: My coach had heard about it, and when she read the requirements, she immediately thought of me.

Preparing for My First CrossFit Competition

Holly had found out about the competition two weeks beforehand, so there wasn’t a lot of time to prepare. Fortunately, I met the requirements: a 35 pound strict press, the ability to run, row, bike, do wall balls, burpees, slam balls, box jumps – all the fundamentals, and mostly body weight.

So I turned to what I know best: making sure I had what I needed to get me through the day. Since it was a small competition, we would be out of there by lunch. I brought my energy drinks, BCAAs, hydration mix, a gallon of water, energy bars, and energy gel. I also packed my foam roller, a blanket, one of those umbrella chairs, and a change of clothes. And I made sure to lay out my outfit the night before: 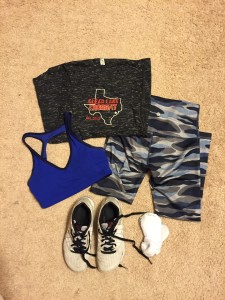 That entire outfit was tested in WODs, so I was confident that the capris wouldn’t slip down, the bra would stay in place, and the tank would appropriately represent my box.

I got to All Day CrossFit around 7:15 a.m., in time to check in, get my cool tank top, use the bathroom, and scope out the box. Two of the WODs had been revealed in advance:

30m shuttle run in between each movement

Knowing what WOD 2 was made me feel sick – I was basically like, “What did I get myself into?” I wanted to run, but I knew Holly was coming, so I warmed up and reminded myself that it was my first CrossFit competition, and I was only expected to give it my all. I finished my first WOD in 6:35.

Holly arrived in between the WODs, and she already knew I was panicking about the wall balls. They are the bane of my CrossFit existence. I’d rather do burpees or thrusters or even row. But please, no wall balls! I struggle with a 10 pound wall ball. And here I had to do a bunch of 14 pound wall balls. The saving grace was that the target was a foot lower. Holly and I immediately strategized on the wall balls, and she suggested that, if it was allowed, I just do them one rep at a time and don’t waste energy trying to catch them. It was allowed, and that was what I did. I got a whole bunch of no reps on the wall balls for not hitting the target, not hitting the wall… just stupid stuff that I need to work on, and I will. I scored 159 for that WOD (total reps). It was not a hobbit-friendly WOD.

Oh, look, the surprise WOD! In between WODs, I had been fueling with energy gel (after WOD 1) and an energy bar (WOD 2). I hydrated. I was ready for this WOD, or so I thought.

For the uninitiated, the S2O stands for “shoulder to overhead” – basically, you have to get the bar over your head any way you can. You can strict press, push press, or jerk it over your head, but it had to clear your head, and then you had to put it back on your clavicle for a full rep. No big deal, right?

I’m not going to lie; this WOD was a killer. I’m not a strong rower; I put the damper all the way on 1, and I still wanted to roll off the rower. (But apparently my splits weren’t terrible, and my last round on the rower, I rowed the fastest, like I do when I run a race.) The butterfly situps weren’t too bad; the S2Os? Let’s just say that by the last round, I was doing more than the lunk grunt that would get me kicked out of Planet Fitness. Holly was right next to me yelling at me not to put down the bar; I wanted to put down the bar. I started on the road to putting down the bar. But I didn’t. I shrieked through those last few reps. I had never pushed myself that hard in my life, not at the end of a half marathon, ever. I finished in 15 minutes, on the nose. This was the aftermath of my first CrossFit competition: 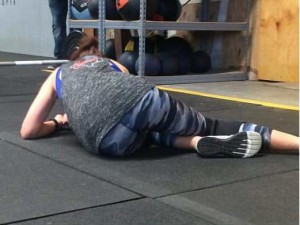 After My First CrossFit Competition

Yes, I was on the floor gasping for breath in a puddle of my own sweat. But I felt amazing. I had faced down some of my least favorite movements: the wall balls, the rower. I didn’t let them defeat me. I pushed through every single bit of self-doubt, all the stuff between my ears, and even the times my body was trying to weasel out of it. This stuff, I can do. I had a blast. (And Holly was proud of me. That means a lot.)

One thing that I absolutely loved about competing is that it didn’t feel like a competition. It was a bunch of women, but there wasn’t this petty mean girl stuff, and no one was laughing at whomever finished last or the girl that dropped all the wall balls. Part of it is probably because we’re not teenagers, but I think a HUGE part of the camaraderie is because we’re all in it together. There was fist-bumping and high-fiving and “you killed that one!” back and forth, and I was so, so happy to see this one woman place, because we had become friends in the span of just a few hours.

That sense of community, really, is what CrossFit is all about. Yes, we’re jerking barbells over our heads and swearing when we drop the wall balls. But we’re also all there for the same reason. We’re pushing our limits and seeing what we can do. We have our Whys, and we’re bringing them into the box (in some cases, literally, as there were some children watching their moms kick some butt). And it doesn’t matter who gets a gift bag or stands on the podium; what matters is that we are working toward something and a part of something bigger than ourselves.

I had so much fun at my first CrossFit competition. I really did. Needless to say, I was sore, but I would do it again in a heartbeat. The energy, the camaraderie – we’re all here to have fun and push ourselves – every single thing, I loved.

*Thanks to Holly for taking my action shots.