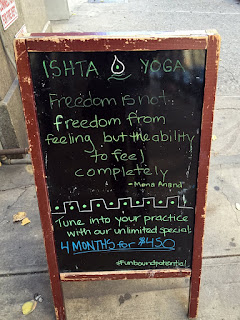 There’s nothing like a little yoga on a Sunday morning to make it a Sunday Funday. Also, after my 13-mile running adventure along the Hudson River Parkway, plus some crazy amounts of walking around the city, I needed to stretch out my sore, achy muscles. During my whirlwind weekend in New York, I stopped in to Ishta Yoga for an 8:15 am community yoga class, which only cost $10 (yay! Practically free in Manhattan!).
I first became familiar with Ishta Yoga about a year ago, when I took a free class at Lululemon. (I didn’t do a Lululemon class this time around because I had brunch plans and needed something earlier.) I loved Sarah Finger’s teaching style, and I figured that any yoga teacher working for her would be good.
My teacher for the morning was Serge Cashman, and the community class is for students of all levels, including inflexible yogi runners. Serge took us through some standard poses, and his teaching style is calm and gentle. He noted our alignment and helped us get into better form, and he offered some great modifications for both beginners and advanced yoga students. There were some Warriors, which I love for hip openers, as well as planks and side planks. Like I said, there were some good old standards, as well as some inversions (wall-based handstands, facing the wall and doing kind of a box pose).
The other thing I really liked was that Serge asked about injuries beforehand to make sure he didn’t kill us. Also, it was a small class, just three of us, so it was almost like a private lesson. I definitely felt refreshed after the practice, not strained at all. It was just what I needed, and if you’re looking for an early, gentle class before brunch, this is it.
As for the studio, it was clean and soothing, and there were the fixings for some tea, so after class I sat quietly, drank some water, and then made myself a cup of chai tea before heading up to Gramercy to have brunch.
Advertisements