In 2012, I embarked on the Psoriasis Diet. I’ve been dealing with psoriasis since I was eight, and I’ve tried creams and lotions. What I hadn’t done was address my diet, and the Psoriasis Diet eliminated a lot of things that could be causing flare-ups. One of those things? Nightshades. But before going on a nightshade-free diet, here’s what you need to know.

Nightshades are all sorts of tasty things: white potatoes (not sweet potatoes), all varieties of peppers (sweet, chili, bell), paprika, red pepper flakes, cayenne pepper, eggplant, and tomatoes. Those are the edible ones, and they’re a staple of a lot of diets. 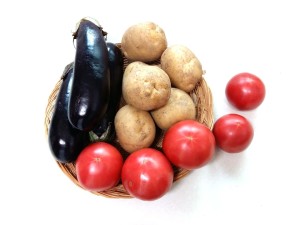 Why Would I Go Nightshade-Free?

Reducing psoriasis isn’t the only reason to cut nightshades out of your diet. There are theories that going nightshade-free can reduce joint inflammation – the potent form of Vitamin D3 in nightshades somehow messes with the way we metabolize calcium and deposit it in the soft tissue instead of the bones.

Nightshades may also mess with your immunity due to alkaloids, such as the nicotine in tobacco, solanine in potatoes, and capsaicin in peppers. If your digestive system is already compromised with an autoimmune disorder, these alkaloids can increase your immune system’s response. If you have a “leaky gut” (something that is tied to psoriasis), alkaloids can irritate your intestinal tract and make things worse.

How Do I Live Without Nightshades?

Yeah, I had this reaction, too. If you’re dealing with psoriasis, joint inflammation, autoimmune disease, or leaky gut syndrome, it might be time to cut nightshades out for a while. I didn’t know what I was going to do without tomato sauce. I’m Italian.

The good news is, it’s entirely possible! I made a nightshade-free fauxmato sauce that is almost as good as a hearty marinara. You can use the sauce for pasta or pizza. For stir-fries and fajitas, I leave out the peppers (and pepper) – it’s hard, but it’s worth it. Here are some of my favorite stir-fry ingredients:

For fajitas, I use onions. I’ll make tacos with lettuce and cilantro. I miss eggplant parmigiana, but I don’t miss being covered in scales (I do still have a degree of psoriasis, but it is much more manageable).

As for potatoes, sweet potatoes are so good that I don’t understand why I didn’t eat more of them.

The Psoriasis Diet cookbook has a ton of nightshade-free recipes, and there are countless resources available for you if you want to ditch the nightshades.

What would make you quit nightshades? What’s your favorite nightshade-free food?