Skip to content
Note: This is the first of three posts I’m writing about my recent visit to Reebok Headquarters in Canton, Mass.

Reebok has seen a lot of changes since I wore my first pair of high-tops in the late 1980s. (Remember those princess aerobic high-tops? I loved them. I also had a pair of classic running shoes in the early 1990s that I didn’t actually run in.) I’ve been curious about what’s been going on with the brand, especially with its recent UFC partnership, its CrossFit and Spartan Race deals, and the release of the ZPump. Does it still support runners? Has it shed its aerobics roots? As I learned during my visit, the answer is a resounding no. 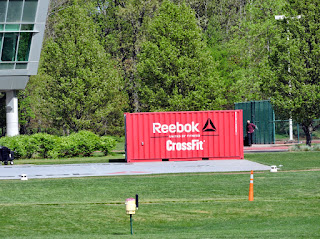 That meant letting go of some of its partnerships, like the one with the NFL to create fan gear, and with the Adidas merger, turning over the sports-specific gear like cleats to the Adidas brand. And it also meant targeting a new set of consumers, what Dan Sarro, Corporate Communications Manager at Reebok, called the “fit gen.” These are 23-30 year olds, male and female, who work out approximately 4 times per week and do a variety of activities: CrossFit, running, yoga, studio classes, and they believe that working out makes them a better person. And they’re doing “tough” fitness – even yoga is more “rebel yoga” with less chanting, more pushing yourself.

Rally, Reebok’s magalog, fits neatly into its marketing. Aimed at women, it’s a catalog of sorts, showing off Reebok’s in-season products for various activities. I’ve gotten it a couple times, and Dan provided me with a couple of copies as well. Interspersed in the pictures of product are articles about female fitness instructors: CrossFit coaches, group fitness instructors, yoga teachers. It’s a good example of content marketing aimed at consumers.

A Culture of Fit

On the tour, Dan and Olivia Rotenberg, Assistant Manager of Corporate Communications, took me and my friend, Christina (who took most of these photos – thanks, Christina!), around the campus – and it’s an impressive campus. It boasts a track, a Spartan Race course, a CrossFit box, basketball courts, a fitness studio, and a gym with cardio machines and free weights. There’s a building that Reebok purchased about 8 years ago used by the Advanced Concepts Team, which tests products 3 seasons in advance. The company also has a production studio on-site for creative work, corporate headshots, that kind of thing.

The gym, box, studio, etc. aren’t just for looks. Reebok employees are encouraged to work out during the day, preferably in group activities. (The company has fully equipped locker rooms, complete with showers, towels, and plastic bags for sweaty gear.)  It’s a “better together,” tribe mentality that helps with team building, and in fact, Olivia told us that just the previous day, the brand communication team had done yoga together as a team building exercise. But working out together, whether it’s in the CrossFit box or the studio, allows employees from different departments to get to know each other. Approximately 70 percent of corporate works out daily, Dan estimated, and it’s been encouraged since 2010.

Even the company cafeteria serves healthy food. Sure, you could order fried food, and a convenience store right next to it does stock M&Ms (as well as the important things like cold medicine, which I pounced upon since I’ve been hit with a nasty one I must have picked up in Orlando). But when you walk in to the cafeteria, the first thing you notice is the salad bar, and the different stations offer healthy sandwich and hot entrée options with nutritional information included.

There’s only anecdotal evidence, not hard data, to show that employees are healthier, but I did observe plenty of fit people walking around. Dan said that the biggest difference since overhauling the cafeteria and encouraging workouts is better morale and increased communication between departments. (The company store also might help – it’s 50 percent off the retail price in there, and chock-full of items you’d find in the latest catalog. Plus, right outside the store is a display of what’s to come at Reebok. You can look, but you can’t photograph or touch – just drool.)

Overall? I’m actually pretty impressed with Reebok’s focus. As a businesswoman myself, it makes sense not to compete in well-established categories, and its partnerships with CrossFit, Spartan Races, and now UFC are all niches that are becoming more mainstream and thus offering Reebok a chance to establish itself in fast-growing categories.

Stay tuned for Monday’s post, which is all about the box.