I’m going to try to describe the awesomeness of Sunday in this review of the Newburyport Half Marathon, but it’s going to be difficult. Bear with me. I went with a group of great people and had an amazing time, probably one of the funnest times I’ve had running ever. The group consisted of SpeedyJ, CoachS, The Builder, and me.

So let’s talk about the half. Green Stride Races did an excellent job with both the course and the majority of the logistics; bib pickup for this race was a well-oiled machine, and within minutes, we had our bibs and t-shirts and headed back to the car for foam rolling, stretching, and using the bathroom at the Riverside Cafe (they were super-accommodating to the influx of female runners that wanted to use a clean bathroom before hitting the course). It was an absolutely gorgeous day for a race, too: low to mid 50s, partly cloudy, and a breeze coming off the ocean.

The four of us headed over to the start line and settled near the back of the 8-minute mile corral and did kicks and swings and squats until we didn’t have room anymore, and we took a picture with my phone (the girl who took the picture took a look at my BlackBerry and joked, “I don’t know how to use this! It’s not an iPhone!” and yes, I’m thinking that my next phone isn’t going to be a BlackBerry.) A few fist bumps and watch beeps and nervous jumps later, and we were off, walking toward the actual start where we would be timed, and then running. LL Cool J’s “Mama Said Knock You Out” blasted through my headphones as I began the familiar bob and weave through the 11-minute milers who were just fooling themselves and of course ended up separated from my group, all trying for PRs.

Despite what you may have heard, the Green Stride Newburyport Half Marathon is not a flat course. There are no sharp climbs, like the Westfield Half Marathon, but there are hills. In fact, there were enough hills for me to be complaining about them during the race. My Garmin claims that there was an elevation gain of 597 feet. I saw plenty of people giving up and walking up the hills, especially the ones further on in the race. The logistics of the half marathon course were good, however: water stops every couple of miles or so, clearly-marked signage, and a gel stop that I avoided near the end.

I had a bit of a spiritual moment around five and a half miles into the race. I was running over the Lower Artichoke Reservoir and feeling great, just really strong and ready to take on the next eight miles and crush them, and I felt the sun on my face and had a moment where I thanked God for bringing me to running and giving me the strength and determination to pursue half marathon training.

Along the way, there were plenty of spectators, and those gave me an energy boost (along with the GU, every 30 minutes like clockwork, plus sips at most of the water stops or from my bottle). Little kids held out their hands for high fives, and so did a group of senior citizens sitting in lawn chairs. I’m always touched by the spectators that come out and watch us as we experience the culmination of our training and nerves on the course.  My favorite sign was the one that said, “Run Like You’re on the White House Lawn.”

Around mile 11, I bonked, despite my best efforts. I felt tired and sluggish, and I reminded myself that I had come this far, and that I was so close to finishing in less than two hours, and that it was ok to slow down my pace a little. And that anyone could do anything for two miles. It was more of a mental struggle at some points – I wanted to lie down; I wanted to take the extra gel even though I had JUST had one; I wanted to stop running and just walk the two miles. I grimaced at the spectators. I grimaced at the race cameras. And then I ran past a scene that will stay with me for the rest of my life: a guy being attended to by paramedics. This was a fit guy, totally looking like a runner, and he was out cold on the side of the course. I said a quick prayer for him and kept putting one foot in front of the other, my hip grumbling and my back hurting, vowing to finish for him.

And as “Don’t Put Dirt on My Grave Just Yet” blasted through my headphones, I did. I ran over the dock and turned up the pace, and I crossed the finish line in 1:57:43. SpeedyJ was waiting for me, and we got waters and met up with the rest of the group – and we all PR’ed!!!

Here’s where Green Stride Races has room for improvement: move the beer tent and the pizza tent closer together. CoachS and I wanted our triangle-shaped food (pizza), and SpeedyJ and The Builder wanted their beers, so we ended up separated and shivering for a bit. Apparently those partaking in the hops weren’t allowed to leave the beer tent until they had finished their beers, which was silly and kind of dangerous, if you think about it.

Anyway, the experience was fantastic! I would have appreciated more of a heads up on those damn hills, but the course itself was beautiful, and the company couldn’t have been better. We went to The Grog in downtown Newburyport for the obligatory post-race burgers, and mine was incredibly delicious and just what I needed.

There really aren’t words to describe how awesome the day was, seriously. On the way home, I dozed off with a smile on my face. 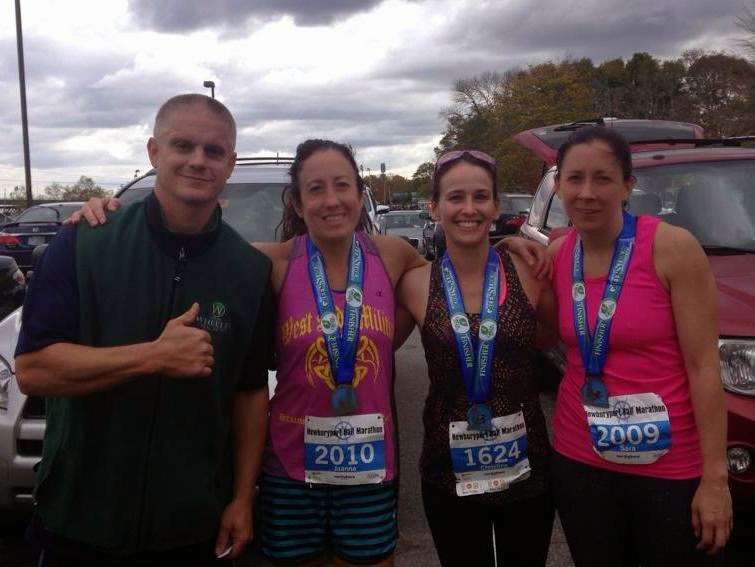 One thought on “Running the Newburyport Half Marathon: A Hilly, Amazing Day for PRs”