After the Seabrook Lucky Trails Marathon Relay on Saturday, I’ve learned my lesson about racing during the CrossFit Open. Namely, don’t.

A couple months ago, Liz and Jesse from Flying Fortress CrossFit dropped in to my box. Jesse mentioned that he was looking for team members for the Seabrook Lucky Trails Marathon Relay, a race run on St. Patrick’s Day weekend in Seabrook. It’s all on the trails, making it a scenic and less bone-jarring run than a road race. The marathon course is four loops of the route. Anyway, I really wanted to run the race, and running just 6.5 miles of it sounded perfect. So I contacted Liz, and Jesse signed me up as part of the team.

But I made a tactical mistake when I was preparing for the race. I completed the CrossFit Open 18.4 workout on Thursday night. Basically, it torched my posterior chain, which I need for running. My only plan was to foam roll and lift some light weights the next day, but I still woke up achingly sore on Saturday morning.

First of all, on Friday, a household member got sick. So I was already anxious and knew I’d have to race home after my leg of the relay (no pun intended). I planned to run first, which would make this a lot easier.

Saturday morning, I got up early and drove to the Seabrook Intermediate School parking lot, which was already packed. Seriously, the parking is the worst part of the Seabrook Lucky Trails races. We couldn’t park in the sports complex lot because there was baseball practice, which left us with the Miramar shopping complex, five blocks away, in the spooky dark. I was the first one of my team to arrive, so I picked up our packets. By the time they got there, I really had to go to the bathroom. Like, really bad. I barely made it out of the porta-potty in time for the start.

The race itself was relatively uneventful. I paid really close attention to the signs because it’s easy to get lost on the trails. It was hot, humid, and at one point, drizzly. I kind of hated it just for that reason. One part of the course went over a grassy patch, but for the most part, we ran on well-used dirt trails that took us through some beautiful Gulf Coast scenery. That part I loved.

Meanwhile, I kept pushing myself, despite my very sore hamstrings. I felt like I couldn’t keep up a good pace, between general fatigue, sore hamstrings, and the weather. All I could do was grab some Gatorade and keep pushing. I’d say this was definitely not one of my better races.

I finished my leg in 57:02.2, and then Jesse was off. Overall, the four of us finished in second place, which is pretty awesome. I feel a little like the weak link on the team, but I also feel like, as a woman, I held my own running on a team with three guys.

Afterward, I basically just wanted to eat some protein (a hot dog was all that I could snag), hydrate (including some FitAid), and stretch. I talked with Liz and the other members of the team for a couple minutes, and I got to see my friend Melissa, who ran the 5K. But then I really did have to leave.

I’ve got to say, the swag was pretty good: a nice medal, a tech shirt, a cap, and some socks. It was definitely worth the entry fee! 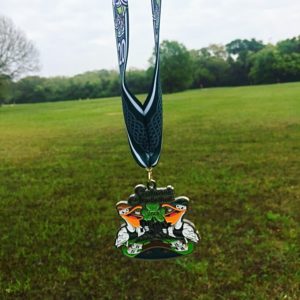 Overall, I’m glad I ran one leg of the relay, but I certainly wouldn’t want to run a two-loop course for a half marathon – or a four-loop course for a full! I had fun, but for as long as I participate in the Open, the Seabrook Lucky Trails Marathon Relay, or any variation thereof, isn’t going to be a part of my race calendar.

(Also, I did not buy the race photos. I’m getting really annoyed that these photographers want to charge upwards of $20 per download.)