I’ve had Wanderlust 108 Houston with me this entire week, and I still feel like I’m processing it.

Lately, I’ve been struggling with mindfulness. I can’t seem to stay in the present. When I heard about Wanderlust 108 Houston, I decided it might be what I needed to jump-start a more peaceful, mindful life. Wanderlust 108 is a “mindful triathlon” that consists of a 5K run, yoga, and meditation, followed by lunch and optional workshops. It’s a lot to process if you’re normally going at the speed of crazy in life. 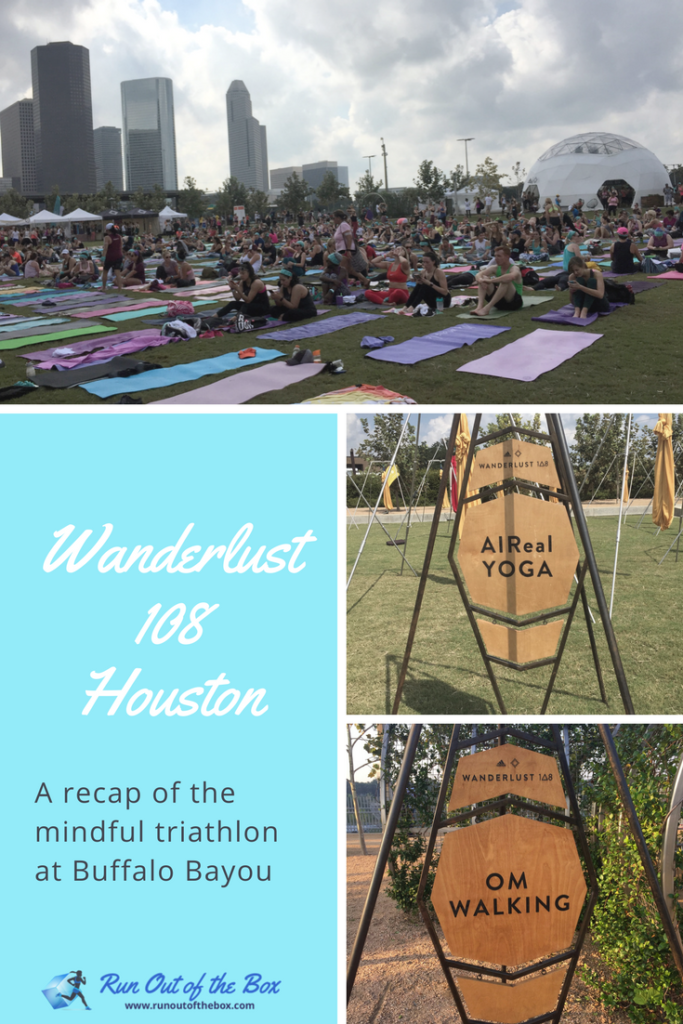 Wanderlust 108 Houston was held at The Water Works at Buffalo Bayou Park on October 14. I arrived early enough to park, check my bag, and chat a little bit with other participants. Two women came because of the yoga; another came for the run.

The morning officially started under the Wanderlust arch with a 5K. After a pre-run stretch, the organizers came through with banners and put us in waves. Unfortunately, these were random waves, so I had to bob and weave past slower runners for a bit. Once I was on the course in Buffalo Bayou Park, I was very happy. The course itself measured more than 5K (my Garmin indicated it was closer to 3.6 miles). We had plenty of time, so I ran the course twice, drawing the ire of walkers on my second lap. Being Houston, it was hot and humid. I loved it.

After my run, I drank massive amounts of water, then checked out the vendors. Numerous tents were set up, but I was drawn to the Wanderlust x adidas dome. It had air conditioning. I purchased a tank top that says “Find Your True North” and a Mala Collective bracelet. I’ve been using the mala for meditation and to center myself throughout the day.

Chelsey Korus led the second part of the mindful triathlon, yoga. I think she was a little intimidated to lead a class in Houston so soon after Harvey. She did a stellar job, though. Her style is more mindful, and the class she led was perfect for a beginner yogi. Chelsey did lead us off our mats for hugging (which I skipped). I don’t think I’ve ever felt so blissed-out in a yoga class. The combination of the heat, humidity, the energy in the park, Chelsey’s instruction – I don’t know, but it worked. I didn’t think I’d say this, but the yoga might have been my favorite part of the day.

The third part of the mindful triathlon was a meditation. Honestly, I didn’t love the leader’s voice, and my stomach was protesting despite the banana and protein shake I’d eaten after the run. So I listened to my body (mindfulness!) and went to pick up my lunch, a vegan bowl of beans, rice, veggies, fruit, avocado. It also came with a Pellegrino, some trail mix, and a cookie. (Spoiler alert: I was craving chicken, so I stopped at Chick-fil-A on the way home for some grilled nuggets.)

Overall, I loved it. LOVED it. I feel strange saying that, but it’s true. I loved running in Buffalo Bayou Park – that’s one of my favorite places to run. I loved doing yoga in the sun with so many like-minded people, to a DJ flow that was contemporary and calming at the same time. Next time, I’d pack my own food so that I could have a quick snack before staying on my mat for the meditation.

I feel like I came away with such a blissed out feeling that I can hold on to and call back when I’m having a rough day. My life is busy, and my workout routine is challenging. I hold myself to high standards. But sometimes, I just need to let go in the sun, let it wash over me and relax.